Equities research analysts expect Fulton Financial Corp (NASDAQ:FULT) to announce sales of $211.50 million for the current fiscal quarter, Zacks reports. Three analysts have issued estimates for Fulton Financial’s earnings. The lowest sales estimate is $210.60 million and the highest is $212.00 million. Fulton Financial reported sales of $213.32 million in the same quarter last year, which would suggest a negative year over year growth rate of 0.9%. The company is expected to announce its next quarterly earnings report on Tuesday, April 21st.

On average, analysts expect that Fulton Financial will report full-year sales of $863.93 million for the current fiscal year, with estimates ranging from $854.00 million to $875.80 million. For the next fiscal year, analysts expect that the business will report sales of $889.27 million, with estimates ranging from $869.00 million to $902.20 million. Zacks Investment Research’s sales averages are an average based on a survey of sell-side research firms that cover Fulton Financial.

Fulton Financial (NASDAQ:FULT) last announced its earnings results on Tuesday, January 21st. The bank reported $0.33 EPS for the quarter, missing analysts’ consensus estimates of $0.35 by ($0.02). Fulton Financial had a net margin of 22.34% and a return on equity of 10.03%. The firm had revenue of $217.76 million for the quarter, compared to analyst estimates of $216.83 million. During the same period in the previous year, the company earned $0.33 EPS.

In related news, Director Ernest J. Waters purchased 2,000 shares of the stock in a transaction that occurred on Tuesday, March 10th. The shares were purchased at an average price of $13.22 per share, with a total value of $26,440.00. Following the completion of the acquisition, the director now directly owns 30,468 shares in the company, valued at approximately $402,786.96. The transaction was disclosed in a legal filing with the SEC, which is available at this hyperlink. Company insiders own 1.02% of the company’s stock.

See Also: What is a bull market? 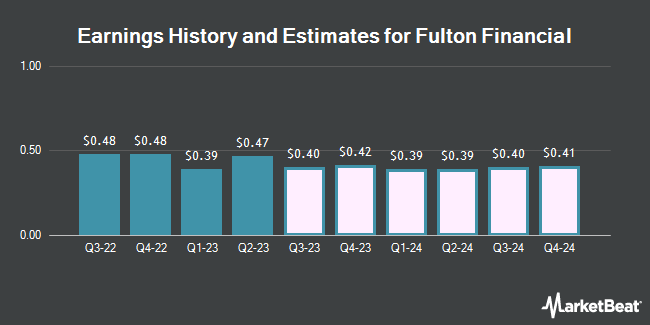 Fusion Trading Up 16% Over Last Week

Complete the form below to receive the latest headlines and analysts' recommendations for Fulton Financial with our free daily email newsletter: