According to Zacks, analysts expect that Fate Therapeutics will report full year earnings of ($1.63) per share for the current year, with EPS estimates ranging from ($2.07) to ($1.36). For the next fiscal year, analysts expect that the company will post earnings of ($1.79) per share, with EPS estimates ranging from ($2.29) to ($1.48). Zacks’ EPS calculations are a mean average based on a survey of sell-side analysts that follow Fate Therapeutics.

Fate Therapeutics (NASDAQ:FATE) last released its quarterly earnings data on Monday, March 2nd. The biopharmaceutical company reported ($0.37) earnings per share for the quarter, topping the Zacks’ consensus estimate of ($0.39) by $0.02. Fate Therapeutics had a negative net margin of 919.00% and a negative return on equity of 49.94%. The company had revenue of $2.80 million during the quarter, compared to analyst estimates of $1.70 million. During the same period in the prior year, the firm earned ($0.25) earnings per share. The firm’s revenue for the quarter was up 68.7% compared to the same quarter last year.

Fate Therapeutics, Inc operates as a biopharmaceutical company dedicated to the development of programmed cellular immunotherapies for cancer and immune disorder. The firm programme cellular therapeutics for the treatment of life threatening diseases, hematologic malignancies, genetic disorders and diseases resulting from the dysregulation of the immune system. 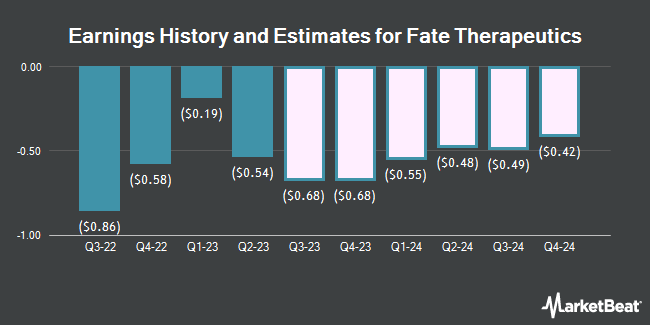 $43.86 Million in Sales Expected for Osmotica Pharmaceuticals PLC This Quarter

Complete the form below to receive the latest headlines and analysts' recommendations for Fate Therapeutics with our free daily email newsletter: